Ihar Babkov is an important belarusian writer, poet, philosopher, and translator. Born in Homiel (Belarus) in 1964. Member of the Union of Belarusian Writers and Belarusian PEN-Centre.

Having graduated from the philosophical department of Belarusian State University in Minsk in 1986, he underwent internship training in London (1992), Warsaw (1995), Paris (1999, upon the scholarship of Hedroits) and Berlin (holder of Literary Colloquium Scholarship, Berlin 2008). The winner of such prizes for literature as Hliniany Vielies (1992) and Zalataya Litara (2005). Finalist of Central-European literary prize Angelus 2009 (Wroclaw). Author of three books of poetry “Solus Rex” (1991), “A Hero of the War for Transparency” (1998) and “To fall asleep, to awake, to listen to the voices of fish” (2009), of a novel “Adam Klakocki and his Shadows” (2001), of a book of essays “The Kingdom of Belarus: Interpretation of Ru[i]ns” (2005) and of historical and philosophical research “The Philosophy of Jan Sniadecki” (2002). Translated J.Joyce, J.D.Salinger, W.B.Yeats, P.Celan.
He first approached literature at the beginning of the 1980s, while reading philosophy in Minsk. In 1986 he publically left komsomol. Caught up the last episodes of dissident movement and for some time in 1987 was an Express-Chronicle reporter in Miensk. That same year he joined the literary underground societies Babilion and Tuteishyia. Participated in the first samvydat (self-published) literary miscellany (Litaratura 1 and Litaratura 2), as well as in the first independent meetings in Miensk. Was detained, tried and fined for organizing and participating in Dziady (meeting aimed at revering the memory of ancestors).
Since the beginning of the 1990s had been taking part in restoring the weekly “Nasha Niva”, with a view to creating a new non-soviet Belarusian culture.
In 1995 he founded the publishing house “Euroforum”, where he commenced to publish the magazine “Frahmenty” (philosophy, study of culture, literature) and where he established a literary line “Bibliyateka Frahmenty” (Library of Frahmenty) (collections of “Gallery B”, “Central Europe”, “Modern Thinking”).
One of the founders of Belarusian Kalehiyum, the author and signer of Belarusian Declaration of Freedom.
Since the end of the 1990s, along with literary activities, has commenced his academic career: works with the history of ideas at the Institute of Philosophy in Miensk, lectures at the universities of Miensk and Vilnia. In 2003 defended his thesis on the philosophy of Sniadecki.
Since the second half of the 1990s his stories, poems and essays have been translated into Polish, Ukrainian, German, Czech and Hungarian. The Polish translation of his novel “Adam Klakocki and his Shadows” was published in 2008 in the Warsaw Publishing House Oficyna 21 and that same year the Polish translation of his book of essays “The Kingdom of Belarus” was published in Wroclaw.
In the summer he wanders in kayaks with his friends. In the autumn he writes poems. In the winter – finishes his novels. In the spring – dreams of awakening.
A left Buddhist – as to the political persuasion. 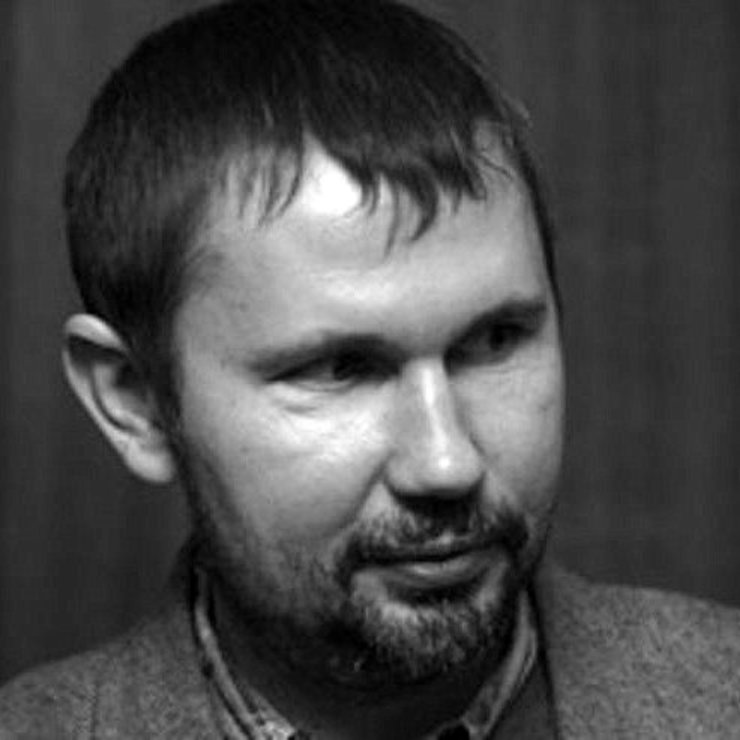